Wrapping Your Head Around Canvas: Part 5

The WebGL portion of Canvas isn’t so much a fringe as an add on to Canvas. Since we’ve been working in the 2D API over the course of this series, we can now move on to working with 3D.

Much like it’s 2D counterpart, WebGL portions of the Canvas API are still in their infancy ,in my opinion, which leaves a lot of room for improvement. Then again what technology really ever starts out at the top of its game?

Three.js, created by Mr. Doob (whose examples I have showcased in the past), was created with the goal of making a lightweight 3D engine with a very low learning curve. The engine renders using SVG, Canvas, and WebGL. Within the 3D engine you can create simple to complex geometry, lights, cameras, animate and materials.

So it’s almost like a stripped down version of the Blender software, save the fact that you’ll be programming your 3D instead of working with it in a real-time space. At times, three.js can be finicky, and if you need to take a moment to try and reverse engineer several of their examples and really understand what it is that drives the engine. For the nature of this article most of you reading may not have a working knowledge of how to model in 3D, then there may be some of you, like me, who have an extensive background in 3D work. Hopefully by the end of this portion in our Canvas related journeys, both the beginner and the expert will meet at a juncture point.

While working in 3D there are several things you must consider when it comes to setting up everything. You’ll want to consider what renderer you’ll be putting your final product on, any cameras placed within your scene, the scene itself, and any objects or materials in said scene. Think of it as digital stage design, and you’re the stage manager. Another thing you’ll need to consider is which browser supports what feature. In part 1 of the Canvas series I touched on the excanvas.js file that aids with the cross browsers issues with Canvas for browsers like IE, unfortunately excanvas.js only supports the 2D API. Chrome or a close second being the Firefox browser may be your safest bet in rendering. IE9 only supports Canvas rendering, so I wouldn’t bet on IE8 or 7 to be of any help. One advantage that WebGl has over Canvas, is that WebGL will run on your graphics cards freeing up a lot of your CPU to concentrate on other things interactions, etc.

Let’s begin by coding out our scene:

The two first variables set in our script are the width and height of our canvas. if you’re not familiar with camera work, we added the camera to our scene then set aspect ratio, and the focal distances with the ‘near’ and ‘far’ variables. The wrap is our Canvas ID and we also set the scene, camera and render engine into place. We set the z-depth of our camera to 300 due to the fact that it begins at 0,0,0 so we can see what we’ve made; then tied it all up with our DOM Element.

Did you think it would be any worse than half of the code in my previous articles?

Since we’ve set everything in place we can now begin to add objects to our scene. If any of you are familiar with your basic 3D objects in 3D Studio Max, Blender, or Maya, then you know there are a number of basic objects we can create:

It All Began with a Plane

Adding these objects to our WebGL with three.js is rather simple too. Let’s begin with the simplest of the object the plane. To create a plane we create a new variable properly name ‘plane’ like so:

So above we’ve stated that we want our plane to be a square, 450 pixels wide by 450 pixels tall, and also set the color using the ‘MeshBasicMaterial’ method. Adding the variable of ‘Mesh’ to the beginning of our string guarantees that the mesh is placed in our scene. Some people may write their Mesh geometry as just ‘Plane’ instead of ‘PlaneGeometry’. I’ve tried it both ways to be honest, and using ‘PlaneGeometry’ tends to yield better results. All that’s left for you to do is add the plane to our scene we’ve set up like so:

The variables, if you haven’t guessed, change to suit the object placed in our scene. You can set variables ahead of time to pass through the parameters of our scenes objects:

This helps organize our JS code a little better. I know it’s easy for me at times to get turned around in my own code. That’s why we comment and organize folks. Now that you got the hang of building a simple plane object down let’s jump into creating other simple objects. In 3D it doesn’t get more basic than cubed and sphere meshes. The only things that will change a bit will be the variable name and a couple of the parameters. For example:

Let’s take a minute to talk about the segments that go into our sphere. You can set as many as you would like, but the number of segments corresponds with the level of detail. Your standard resolution for a smooth sphere might have up to 36 segments, just make sure to toy around with the segmentsWidth and segmentsHeight properties to get you desired result. Your radius property will help you size the sphere.

Like the above example, creating a cubed object also contains three different parameters, your standard width, height, and depth.

When looking to create a cylinder or cone, there isn’t much different between the two objects. You can really tell when we look at the code:

Adding Lights and Rendering the Scene

So now that we’ve created a scene and built our geometry in the scene, we can now start to add lights to illuminate things or create some broad lighting for a dramatic effect. Three.js will render our geometry, however it will appear as a flat 2D shape without lighting applied into our scene. One of the basic lighting rigs we can setup is a point light.

All that’s left for us to do with our scene is render everything. It’s as simple as:

The below example is of an object using the CubeGeometry method, you’ll notice I included a snippet of code that makes up our object in the image: 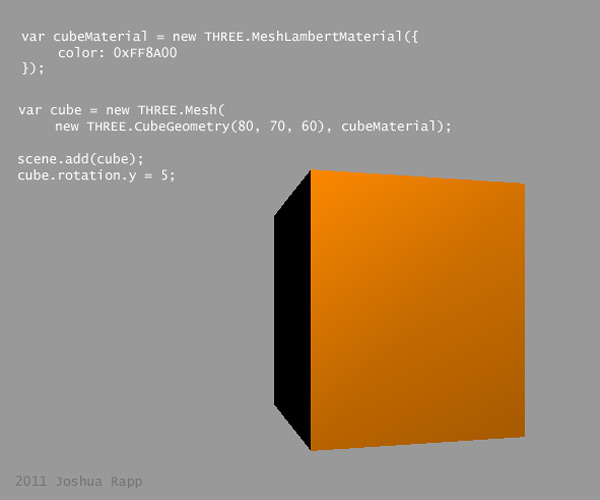 We’ve just created 3D geometry in our browsers without any 3D software, it’s almost reminisent of Papervision. As I always like to say in these canvas articles, take some time to play around with the technology. Familiarize yourself with the ins and outs of Three.js.

With your basic geometry covered in this article, we’ll look at particle effects and text in part 6. If you think you may need a refresher course, go back to the beginning with Canvas Part: 1 and work your way through the tutorials.

By Joshua Rapp
Josh is currently the Creative Director at Rappsody Studios located in Jacksonville, FL and has been working in across the web for close to eight years. He has a soft spot for front-end development and comics. More articles by Joshua Rapp
Latest posts
Resources

By DeveloperDrive Staff
Zenserp is a Google Search API by Austria-based SaaS Industries. It allows you to scrape search engine results pages in realtime. It’s easy to use and solves common problems that are associated with SERP scraping. In this Zenserp review, we’ll go over what SERP scraping is, what the benefits are, and how Zenserp makes SERP scraping easier. We’ll also walk you through Zenserp’s main features, as well as list the pros, cons, and pricing. What is Serp Scraping & What are the Benefits? ... First...
Uncategorized

By DeveloperDrive Staff
Although you may not have heard the term “geocoding” before, chances are you’ve used the technology. From apps that use your location to those that point out landmarks on a map, geocoding is critical to the workings of such applications. Geocodeapi automates the conversion of addresses to geographic coordinates and vice versa. It can also help with data and analysis, as well as auto-completion for location form fields. In this Geocodeapi review, we’ll talk more about what geocoding is,...
JavaScript

By Woody Hayday
I log every minute I spend at a computer. Ever since I became a full-time freelancer, I’ve been tracking my time, assigning each moment of my day to a project and a sub-task. It all started from a desire to make the best possible return on my time. As a freelancer who charged hourly, each and every minute had a monetary value. I’ve since relaxed my approach, but some positive aspects of time-watching have stuck with me. The over-used Drucker quote goes something like “What’s measured improves”,...
CSS

By DeveloperDrive Staff
Everyone knows that in order to create the best websites you need to be up-to-date with the latest trends and developments. We asked experts and long timer designers and developers to share with us their favorite books, and the result is a selection of the very best books that everyone should read. Our list includes 25 books that all developers must read if they want to create great web sites. We cover everything from HTML to CSS, JavaScript and jQuery books. 1. Introducing HTML5 ...    ...
Deals

By DeveloperDrive Staff
Black Friday is just around the corner! It's the day considered as the beginning of the Christmas shopping season. In 2018, Black Friday falls on November 23. Companies offer awesome promotional deals on this day in all kinds of industries. The web development industry is no different. In this guide, you can find the best Black Friday deals for web developers. Don't miss out on them! 1. Elegant Themes - 25% Off All Themes & Free Giveaways & Free iMac Pro ... Elegant Themes has prepared for Black...
WordPress

By Rafay Ansari
The purpose of this article is to help WordPress website owners comply with the GDPR regulation. The author is not a lawyer and this article should not be taken as a substitute for legal advice. If you run a WordPress website and are worried that the new General Data Protection Regulation (GDPR) is going to affect how your website handles user data, you are not alone. Individuals, businesses, and websites around the world are preparing themselves for a new era of data security and privacy protection....
Tools

By DeveloperDrive Staff
If you are a freelancer or run an online business a good time tracking tool will be one of your most essential assets. It doesn't only help you with time management but it also makes it easy to evaluate your productivity and find the bottlenecks where your workflow could be improved. If you bill your clients by the hour you also need to find a way to prove that you spent all the time on their project. In this article, we have collected the 12 best time tracking tools for you. They all come with different features...
Resources

By DeveloperDrive Staff
There are multiple online learning platforms where you can learn how to code. Each adapts to different learning styles, so the most important thing is to find the one that best fits your own needs. In this article, we have collected 15 places where you can learn how to code in 2019. The platforms cover both client- and server-side programming languages and technologies. The prices are as of early 2019. However, they might change at any time, so always check out the latest fees before you make a decision....
Home CSS Deals HTML HTML5 Java JavaScript jQuery Miscellaneous Mobile MySQL News PHP Resources Security Snippet Tools Tutorial Web Development Web Services WordPress