We usually don’t think of Java as a language for creating web applications, but there are actually several high-quality Java web frameworks that are worth considering. The Java Virtual Machine is a solid platform that makes it possible to follow the “Write Once, Run Anywhere” (WORA) principle in web development.

In this collection, you can find six popular Java web frameworks with which you can build scalable and reliable apps.

The Spring Framework is the most well-known Java framework, coming with tons of features, utilities, and resources. You can use it to create any kind of Java applications, including microservices and enterprise-level software built on top of Java EE. Besides Java, the Spring Framework supports two other programming languages running on the Java Virtual Machine: Kotlin and Groovy.

As the Spring Framework takes care of recurring programming tasks such as security, data processing, and messaging, you can focus on writing the business logic of your application. It’s a bit complicated to configure the Spring Framework, as it comes with many possibilities. However, if you want to get started fast you can make use of the Spring Boot that provides you with a ready-made configuration for building Spring applications.

Struts is an open source MVC (Model-View-Controller) framework that allows you to create enterprise-level Java EE web applications. The initial Struts framework (Struts 1.x) was rebuilt in 2007 when it was merged with the WebWork web application framework. Struts 1.x and Struts 2.x are not interchangeable, as there are important differences between the two frameworks. You can download both from Struts’ Releases page.

The Struts framework is owned by the Apache Software Foundation and developed by a group of volunteer programmers. Struts 2 has a simple plugin architecture that makes it possible to extend the framework by adding a single JAR to the classpath of your Java app. The framework comes bundled with multiple plugins, many of which let you integrate Struts 2 with other Java frameworks such as Spring, JavaServer Faces, JUnit, and others.

JSF has been lately challenged by popular JavaScript UI frameworks, however it has still some advantages over them. It’s an official Java standard, so you can use it for standard-driven development that ensures better portability. In addition, with JavaServer Faces, you can create well-designed UI components with minimal front-end knowledge, as you can rely on component frameworks belonging to the JSF-ecosystem, such as Primefaces.

The Play Framework is a reactive Java framework that lets you build scalable web applications in Java and Scala. It addresses the issues of other Java web frameworks, such as complicated architecture, steep learning curve, and slow development cycles. The Play Framework is written in Scala and follows the MVC architectural pattern. By default, it uses the Scala-based Twirl template engine. However, you can also use other libraries such as React to create the front-end views of your application.

Play follows the principles of The Reactive Manifesto. Therefore, it allows you to build flexible, loosely-coupled applications that are more tolerant of failure (i.e. they stay responsive when a failure happens). The Play Framework’s reactive model is based on Akka Streams, so it can process asynchronous HTTP requests. This makes it more suitable for microservices and distributed applications than other Java frameworks. 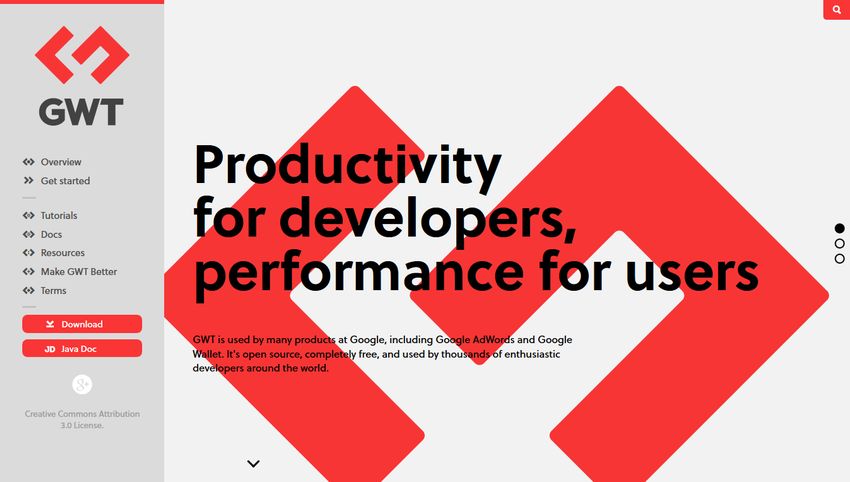 The Google Web Toolkit (GWT) is a Java web framework developed by Google who also uses it in its own products such as Google Adwords and Google Wallet. With GWT, you can build client-side JavaScript applications in Java. You need to write your code in Java, then deploy it as JavaScript. Similar to JavaServer Faces, the Google Web Toolkit focuses on creating user interfaces of reusable components.

Web apps created with GWT have cross-browser compatibility. The framework offers functionalities for typical web development tasks such as browser history management, bookmarking, UI abstraction, remote procedure calls, and many others. You can also save a lot of time by using GWT’s pre-designed classes to create dynamic behaviors such as drag-and-drop UIs.

Vaadin is a one of a kind Java framework that allows you to create beautiful web applications using pre-designed UI components. You can bind your data directly to the components, as Vaadin provides direct access to the DOM from the Java back-end. Vaadin has two parts: the Vaadin Flow framework and the mobile-first Components library. Besides, Vaadin comes with ready-made themes you can customize via a styling API.

Previously, Vaadin 8 used GWT (see above) to compile the back-end Java code to front-end JavaScript. Vaadin 10 was a major revamp of the framework. The client-side was completely rewritten, GWT was dropped and Vaadin switched to the Web Components standard and Google Polymer on the client side. The new Vaadin components are a set of web components that can be combined with other client-side JavaScript technologies such as React and Vue, or even plain JavaScript.

Web frameworks are an important part of web development, as they can save you a lot of time by providing functionalities for common tasks. They also come with other perks as well, such as plugins, add-ons, pre-built UI elements, or integrations with third-party tools.

If you are also interested in pure front-end frameworks, take a look at our recent collection of the most interesting JavaScript frameworks.

To learn more about Java basics, check out our beginner’s introduction to Java EE, too.

By DeveloperDrive Staff
Enabling dark mode in CSS allows website visitors to switch to an eye-friendly and resource-saving design whenever they want. There are a couple of UX patterns you can use to add a dark theme to your site. In this tutorial, we will show you how to add a simple jQuery toggle to the top of the page so that users can easily switch dark mode on and off. Our demo will be responsive as well, so it will look good on all device sizes, from smartphones to desktops to large screens. Here is how the light mode will finally look...
Resources

By DeveloperDrive Staff
Material design is a popular visual design system created by Google. It aims to enable designers and developers to create applications that have a unified look on all platforms. Apps that follow material design principles look beautiful and professional on all operating systems and devices. Google's official material design toolkit supplies you with many assets such as guidelines, components, color palettes, themes, and icons. However, that's just the beginning. As material design is an open-source...
Resources

Getting started with Toast: A light-weight responsive CSS grid

By Tahir Taous
Toast is a really light-weight fully responsive CSS grid. Toast grid was created by Dan Eden, the man behind animate.css and baseline.js. If you are already using Bootstrap, Foundation or any other CSS framework, You might ask why you should learn a new grid system. The number one reason to use Toast grid system is that, it is very light, no-nonsense grid system, for creating responsive websites quickly and easily. Bootstrap, Foundation and many other CSS framework allow you to create responsive,...
Resources

The 10 Best Atom Themes for a Unique Developer Experience

By DeveloperDrive Staff
Atom is one of the most popular code editors on the market, developed and maintained by GitHub. It comes with multiple awesome features such as a built-in package manager, smart autocompletion, and cross-platform editing. As Atom is completely customizable, you can also change the look and feel of the editor with the help of pre-designed Atom themes. By default, Atom is packaged with four UI and eight syntax themes in light and dark colors. Besides, the open-source Atom community has also created...
JavaScript

By DeveloperDrive Staff
If you have an information-rich website or application, you might want to visualize your data so that users can better make sense of it. Although tables can be quite useful in certain cases such as pricing and feature comparison tables, other kind of information is easier to process with the help of some kind of data visualization. JavaScript libraries such as Chart.js let you generate different types of HTML5 charts such as line, bar, pie, doughnut, and area charts. Chart.js is a versatile library...
JavaScript

By Woody Hayday
I log every minute I spend at a computer. Ever since I became a full-time freelancer, I’ve been tracking my time, assigning each moment of my day to a project and a sub-task. It all started from a desire to make the best possible return on my time. As a freelancer who charged hourly, each and every minute had a monetary value. I’ve since relaxed my approach, but some positive aspects of time-watching have stuck with me. The over-used Drucker quote goes something like “What’s measured improves”,...
Web Development

By DeveloperDrive Staff
Code editors are probably the most important tools of web developers. Finding one that best fits your workflow and goals, and has all the features you need can save you a lot of time and significantly improve your code quality. In this article, I will show you the five best cross-platform code editors for web developers. All of them run on the three major operating systems, Windows, Linux, and OS X. The features you will need mainly depend on your working style, current coding knowledge, and the kind of...
CSS

By DeveloperDrive Staff
Before the flexbox layout module was introduced, it had been a challenge to create the holy grail layout. We had to use all kinds of tweaks to achieve this kind of layout loved both by marketers and website owners, as it allows us to use two sidebars at the same time — one on the left and one on the right side. Thanks to flexbox, now we can build it in just a few lines of code. So, in this tutorial, we will look into how to create the holy grail layout with flexbox — in two different ways. First, we will use one huge...
Home CSS Deals HTML HTML5 Java JavaScript jQuery Miscellaneous Mobile MySQL News PHP Resources Security Snippet Tools Tutorial Web Development Web Services WordPress