8 Most Interesting JavaScript Frameworks to Learn in 2019

Web development has become so complex, that these days many developers rely on frameworks when building applications for the web. JavaScript frameworks speed up the development workflow, enforce best practices, and provide you with a maintainable code base and an effective architecture.

React is a popular JavaScript framework, created and maintained by Facebook. You can use it to build interactive user interfaces for single page applications. React has introduced a component-based architecture to web development that challenged the traditional MVC (Model-View-Controller) pattern. React components are encapsulated and manage their own states. When the data changes, React updates only the components that have been affected by the change.

There’s a huge ecosystem around React, including learning materials, an enthusiastic developer community, and a plethora of tools. Although React has been around for a while, it’s still evolving. There are a lot of jobs for React developers, too. If you want to master a JavaScript framework that will likely stay relevant in the future React is definitely worth your time.

Vue.js allows you to build single page applications and UI components using a lightweight and versatile JavaScript framework. It’s progressive which means you can use it as both a library that adds extra features to an existing user interface or a framework that runs your whole application. Vue is frequently compared to React, as it also splits a web page into reusable components.

Vue uses its own HTML template syntax with which you can bind the rendered DOM to the underlying data. When the data changes, Vue automatically updates all instances in the HTML. Although React is still more popular, Vue is quickly catching up. It has a flat learning curve, great dev tools (even a Vue CLI), and some decent learning resources, too.

Angular is a TypeScript-based JavaScript framework developed and maintained by Google. The versioning of the Angular framework is a bit confusing. Angular 2 was a ground-up rewrite of AngularJS (1.x). By now, it has reached version number 7 (Angular 7). While AngularJS was an MVC (Model-View-Controller) framework, Angular 2+ is considered component-based. They follow a completely different logic, so AngularJS apps can’t be updated to Angular 2+.

With Angular, you can create single-page applications for any platforms, including web, mobile web, native mobile, and native desktop. It’s a great choice if you have already used a statically-typed language such as Java, C++, or C#. It takes more time to learn Angular than Vue or React, as it has a large code base and several possibilities. But, it has a huge ecosystem and is very popular on the job market, too.

Next.js is a minimalist JavaScript framework that makes server-side rendering possible in React applications. By default, React renders all content on the client side, which leads to a couple of problems. First, the user has to wait until all scripts load in the browser. Second, it might cause some SEO issues, too, as search engines are still not that good at indexing JS apps. The solution to this problem is rendering content on the server side before sending it to the browser. And, this is what Next.js does really well.

It comes with awesome features such as hot code reloading, automatic code splitting, automatic routing, and more. If you use Next together with React, you get Vue’s simplicity combined with React’s powerful features. If you already use React, Next is definitely a good next step in mastering JavaScript app development. Next.js has great in-house tutorials that let you get started with the framework in just 1-2 hours (if you are an experienced JS developer).

Relay is another JavaScript framework that helps you create better React applications. Just like React, Relay is also developed and maintained by Facebook. It allows you to create data-driven React apps powered by GraphQL. GraphQL is a query language with which you can make specific server requests—it’s considered as an alternative to REST.

The Relay framework enables you to create static queries by adding GraphQL to the views that will use the data. Then, Relay aggregates these queries into consistent network requests. By generating code ahead of time, you can create faster and more performant applications. You can either convert your existing React apps with Relay or start to develop a new one using Relay Modern (a streamlined version of the Relay framework).

Mithril is a lightweight JavaScript framework with several features similar to React and Vue. You can check out the detailed framework comparison to React, Vue, and Angular in Mithril’s documentation. If you are on the look for a really small framework that lets you build single page applications, Mithril might be an excellent choice for you. It weighs just 8 KB (gzipped) and runs almost twice as fast as React and Angular.

Similar to view frameworks like Vue and React, Mithril also relies on components and interacts with the virtual DOM. However, it also has some built-in utility modules you won’t find in React, such as out-of-the-box XHR and routing.

Mithril has a relatively flat learning curve. You can get started learning with the Mithril team’s 10-minute learning guide (right on the homepage). Due to its simplicity, Mithril might not be the best solution for a complex project, but it provides you with everything you need to create a simple application.

Aurelia focuses on web standards, uses convention over configuration, and comes with minimal framework intrusion. It’s a unique JavaScript framework, as it lets you build UI components using vanilla JavaScript or TypeScript. Aurelia components are, in fact, simple JS/TS classes with corresponding HTML templates. The syntax is quite straightforward, here’s a simple example from the docs:

As you can see, if you know how to use HTML and JS, you can start creating Aurelia applications without much further learning. Aurelia has a reactive binding system and syncs your UI with the best performance possible. It also has a fairly large ecosystem with developer tools like a CLI, Chrome debugger, and Visual Studio Code plugin. 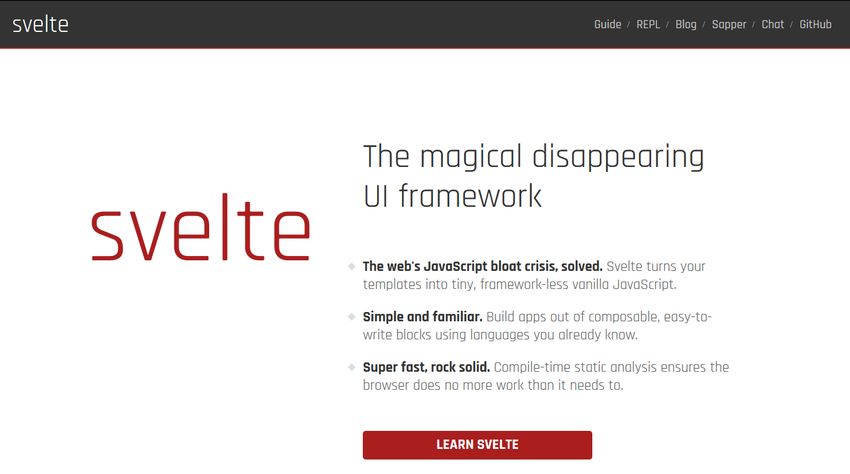 The Svelte framework has been created with the intent to solve the JavaScript bloat crisis of the web. Its creators call it the “magical disappearing UI framework”, as it transforms framework code into framework-less vanilla JavaScript. Svelte has its own compiler that converts the app code into client-side JavaScript at build time, instead of interpreting it at runtime as most frameworks do. As a result, the framework code disappears by the time it reaches the user’s browser.

Svelte apps are built of single-file components using the .html extension. You can either create an entire application with Svelte or incrementally add it to an existing code base. It’s also possible to ship standalone Svelte components that work anywhere without any external dependencies. Svelte has a relatively flat learning curve. If you want to experiment with a JavaScript framework that relies on its own compiler, Svelte is worth a closer look.

The frameworks we have discussed in this article are just a small selection of all JavaScript frameworks—the ones we have found the most interesting at this point in time. If you are interested in more options, you can also consider having a look at the following frameworks:

If you want more resources related to React – which is still the no. 1 JavaScript framework – take a look at our collection of the best React development tools or learn how to get started with Facebook’s Create React App, too.

By Rafay Ansari
For a popular content management system like WordPress, security is of paramount importance. Millions of people use WordPress to share information with people all over the world. And since WordPress makes this so easy and gives you complete control over your content, there might be cases where you’d like to share your content with a select few people. Perhaps you want to share a wedding photography album with your guests or share selected articles with only your subscribers. Whether you need to...
Web Development

By Angie Vella
Grav is an open source flat-file CMS platform, built by the RocketTheme Team. While there are plenty of great CMS platforms available, they are all mostly database-driven, which can be overkill for smaller websites. Instead of a database, Grav uses folders and a basic file structure, it is focused on speed, simplicity, and flexibility. After reading all of the documentation and spending some time trying Grav out, I’m definitely sold and will be using the platform. I hope you will too. What We’ll...
WordPress

How to Fix Error Establishing a Database Connection in WordPress

How to Install WordPress Locally on Windows with XAMPP

By DeveloperDrive Staff
Running a WordPress site comes with multiple security risks you need to manage somehow. One of the biggest threats comes from untested themes and plugins created by third-party authors. To make sure you don't install a plugin or theme that breaks your WordPress site, the best thing you can do is to test it in a local environment before activating it on your production site. There are a couple of software you can use to create a local WordPress install—XAMPP is one of the best options. It consists of: X:...
HTML

By DeveloperDrive Staff
Adding Twitter Cards to your website can help you present your brand on Twitter in a more engaging way. By adding a simple HTML snippet to the <head> section of your page, you can make Twitter display rich content (including a summary and image) when your readers share your posts or pages on the social network. By default, when someone tweets your posts, Twitter only displays a plain URL that doesn't tell much about your content. To make Twitter show Twitter Cards rather than URLs, you need to add extra...
Resources

By Justas Markus
Do you want to get the best marketing results, get more followers and understand them on Twitter this year? These tools will help you become more productive, efficient and skillful. They will help you understand when to tweet, which hashtags to use, how to tweet, who to follow, and much more. Managing your Twitter account along with your other online networks can be difficult if you have limited resources. It means we need some help. Today I’ve collected 50 twitter tools for productivity, for efficiency,...
WordPress

By DeveloperDrive Staff
The best WordPress table plugins let you add different kinds of tables and charts to your site. They also make it possible to export and import table data, customize the look and feel of your tables, sort table cells, and perform other actions. Although there are many WordPress table plugins on the market, many of them haven't been updated for a while. So, in this post, we have collected the best premium and free WordPress table plugins that are regularly taken care of. Note that the prices of the plugins...
PHP

How to build a simple reservation system

By Emma Grant
This article will provide a brief tutorial in using HTML, CSS, JavaScript, PHP, and MySQL to build a simple reservation system. It is assumed you are already at least a little familiar with all these technologies, and the real purpose here is just to link them all together to accomplish a common task. It is intentionally over-simplified, because it is aimed at beginners. Scenario ... Let’s suppose our client owns a conference center where people can book rooms for conferences and other events....
Home CSS Deals HTML HTML5 Java JavaScript jQuery Miscellaneous Mobile MySQL News PHP Resources Security Snippet Tools Tutorial Web Development Web Services WordPress