Linux is an open-source and flexible operating system that’s an ideal choice for programmers and developers. As Linux comes with no copyright or other restrictions, you can modify the source code, add your own features, and configure the kernel according to your needs. It’s also less prone to viruses and malware and uses system resources in an efficient and optimized way.

As anyone can add their own tweaks to the Linux kernel, there are hundreds of Linux distributions available to anyone for use. Many of them have been created with beginners and regular desktop users in mind and don’t have many programming features. However, there are also several Linux distros that cater to the needs of the developer community.

In this article, we have collected the best programmer-focused Linux distributions for you.

Debian is probably the most well-known Linux distro that is also an excellent choice for programming. It’s been around since 1993, so it’s a quite stable and secure operating system. Debian also serves as the basis of many other Linux distributions such as Ubuntu and Kali Linux (see them below).

Getting started with Debian:

Debian has a huge open-source community around it and you can also find many tutorials that can help you get started. You can install the Debian operating system in many different ways, for instance with installation images, CDs, DVDs, and USB sticks. You can also download a couple of free Debian handbooks in different languages and browse the Debian Wiki that contains all the important info.

Ubuntu is a highly popular Linux distribution developed and maintained by Canonical. It has been named after the African philosophy ubuntu which is most frequently translated as “humanity towards others”.  The Ubuntu operating system was first released in 2004 and new versions are released twice in each year: April and October.

Thanks to its reliable continuous development model, Ubuntu is frequently used in server administration and cloud applications. Ubuntu is an ideal platform for development in high-level programming languages such as Go, Python, Ruby, and Node.js. Besides, it’s also the reference platform for Kubernetes on all major public cloud platforms.

Getting started with Ubuntu:

Ubuntu has an incredibly huge ecosystem where you can find everything you need, from tutorials to videos to documentation to discussion forums. You can download two versions of the OS: Ubuntu Desktop and Ubuntu Server. If you are willing to upgrade the OS regularly, choose the latest release (for instance, 19.04 stands for the April 2019 release). If you need long term support, rather go for the latest LTS (long term support) release. 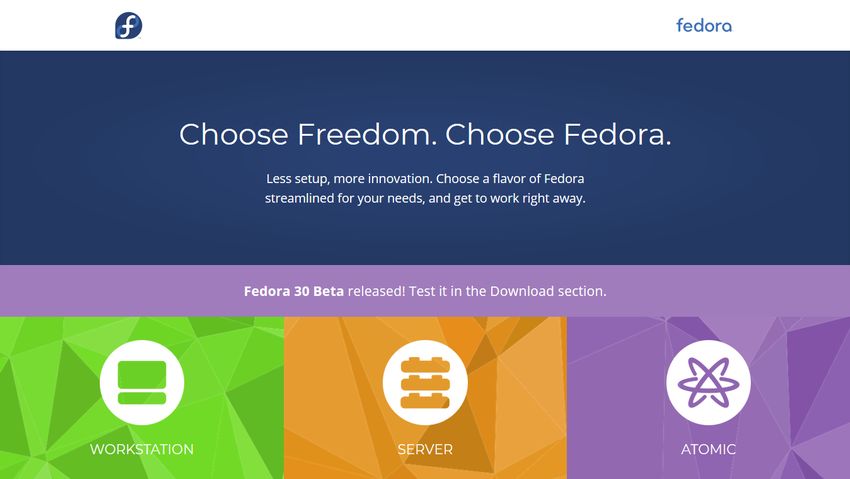 Fedora is the favorite distro of Linus Torvalds, the creator of the Linux kernel. He loves it for its ease of use and support for PowerPC. Fedora currently has three editions: (1) Fedora Workstation for personal use, (2) Fedora Server for data centers and (3) Fedora Atomic for LDK (Linux-Docker-Kubernetes) stacks used in cloud computing.

As Red Hat is the principal sponsor of the Fedora project, many of its new features later get adopted by Red Hat Enterprise Linux, too. Fedora supports a plethora of hardware such as PCs, printers, and scanners from different vendors. So, if you choose Fedora you will have little to no problems with hardware compatibility.

Getting started with Fedora:

Fedora has 6-month release cycles and each release is supported for 13 months. You can install Fedora Workstation using Fedora Media Writer (here’s a step-by-step tutorial by Fedora Magazine). You can download Fedora Server as an ISO image and Fedora Atomic as an Atomic Host Image. Fedora has an active discussion forum where you can ask any Fedora-related question.

Arch Linux is the most well-known rolling Linux distribution, loved by fans of sleek software architecture. Following the rolling release model, the distro receives new features and updates as soon as they are ready for production. So, you don’t have to install new releases and your OS is always up to date.

To use Arch Linux, you have to build your operating system by yourself. The default OS is quite basic so that you can add only the packages you really want to use. As the installation process is quite complex, Arch Linux is only recommended for experienced programmers who have ample knowledge of Linux.

Getting started with Arch Linux:

You can install Arch Linux using ISO images you can download from the official website. During the installation, you need to configure everything manually but the ArchWiki has a good installation guide. The ArchWiki also serves as documentation, available in several different languages. Arch Linux has several mailing lists, IRC channels, discussion forums, and a great Arch Linux Women community, too. 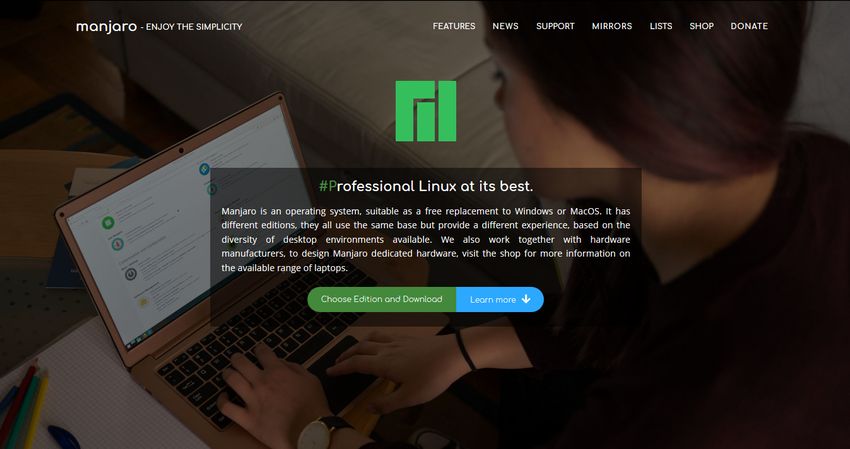 Manjaro Linux is an Arch-based Linux distro that adds a graphical installer and a couple of user-friendly features to Arch Linux. It’s an ideal choice if you want to get access to Arch Linux’s advanced features but with a more straightforward installation and management workflow.

As Manjaro is based on Arch Linux, it also uses rolling release cycles. However, Manjaro’s stable releases lag about 6 weeks behind the original Arch Linux releases. You can download Manjaro with different desktops such as XFCE, KDE, Gnome, and others. In addition, it comes with pre-installed graphical and desktop applications, plus codecs that enable you to play multimedia files right from your desktop.

Getting started with Manjaro Linux:

Kali Linux is a Debian-based Linux distro that mainly focuses on security. It has been designed for penetration testing to assess the security vulnerabilities of networks and applications. As a result, Kali Linux is loved by ethical hackers, security experts, and programmers who want to test the security of their applications to different types of cyber attacks.

Getting started with Kali Linux:

You can install Kali Linux as pre-built or custom ISO images. If you need help with the installation, you can find detailed installation scenarios in the docs. You can reach out to the Kali Community in many different ways, such as a support forum, a bug tracker, an IRC channel, and social media sites. Besides, Kali has its own training program where you can take a Certified Penetration Tester course.

Linux is an open-source operating system with hundreds of distributions that cater to different user needs. Many distros have been created specifically with programmers and developers in mind. They come with features like advanced security, continuous deployment, developer packages, and full customization.

In this article, we have collected the top choices of developer-focused Linux distros. Ubuntu, Fedora, and Manjaro Linux are excellent solutions both for novice and experienced developers. However, Debian, Arch Linux, and Kali Linux are mainly recommended for programmers with a solid knowledge of Linux.

To learn more about Linux programming, check out at our article about how to use UNIX file permissions as well. We also have a hand-picked collection about the 15 best places to learn how to code that’s worth having a look at, too.