Vue.js is a popular JavaScript framework that allows you to create single-page applications and user interfaces. It has a huge and active open-source community who have created hundreds, if not thousands of tools related to the framework. In this collection, you can find starter kits, boilerplates, developer tools, component libraries, and other resources you can use in your everyday Vue.js workflow.

The official Vue.js guide helps you get started with the Vue framework. It includes a comprehensive learning guide, the Vue.js API documentation, the official code style guide, code examples, and more. You can also get in touch with the Vue community by joining the forum or chat, or attending a meetup.

Vue CLI 3 provides you with a standard toolkit for rapid Vue.js development. It has out-of-the-box support for developer tools like Babel, PostCSS, TypeScript, ESLint, and others. It also comes with a graphical user interface that lets you quickly prototype your Vue.js app. You can install Vue CLI 3 with the npm and Yarn package managers.

Vue Starter is a Vue.js boilerplate for production-ready PWAs (progressive web applications). It focuses on performance and development speed and has an impressive 90+ Lighthouse score. Vue Starter is an opinionated boilerplate using tons of optimizations and best practices. If you want to create a PWA using Vue.js, this is your go-to boilerplate.

Vue Design System is an open-source boilerplate for building UI design systems with Vue.js. It includes a set of tools, patterns, and practices you can use as a foundation for your project. Vue Design System is built on top of the Vue Styleguidist style guide generator, Webpack, and Theo (Salesforce’s design token tool). To see what you can create with Vue Design System, have a look at the live demo on their site.

Nuxt.js is a popular Vue.js framework that lets you create performance-optimized user interfaces and single page applications. It makes server-side rendering (SSR) of Vue.js applications possible. SSR improves the SEO of your web apps and results in more responsive UIs. Nuxt.js has a modular architecture, with 50+ modules you can choose from.

Hare is a web application boilerplate that allows you to create full-stack applications with Vue.js. Besides Vue, it’s based on the Element UI library, Nuxt.js, and the Koa 2.x Node.js framework. You can install Hare with the Yarn and PM2 package managers.

Vue.js WordPress Theme Starter helps you create your own WordPress theme using Vue.js on the front-end. It’s based on the BlankSlate WordPress starter theme. VueRouter and the Vuex state management pattern are included in the project. The starter theme follows the development guidelines of Vue.js and comes with Firebase support.

Vue.js DevTools for Firefox is a browser extension you can add to your Firefox DevTools. It extends your developer tools with an extra “Vue” tab that lets you analyze and debug your Vue.js applications. You can inspect your components, states, events, and more. You can have a look at the source code of the project on GitHub, too. 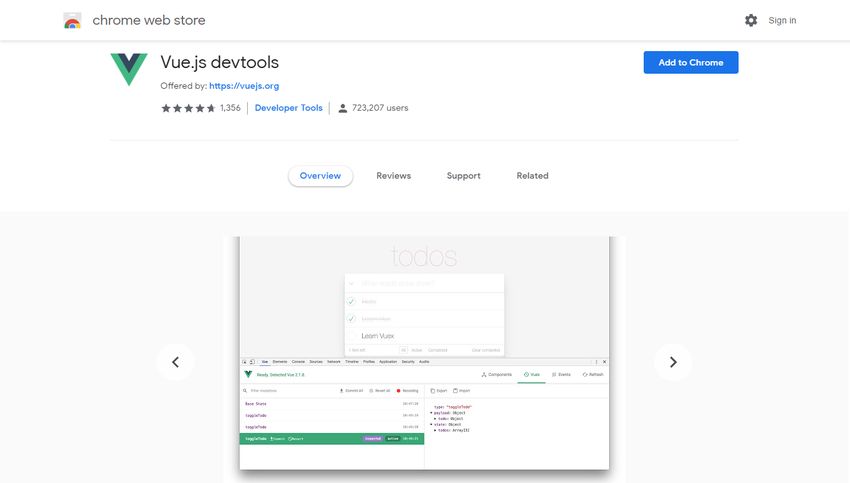 Vue.js DevTools for Chrome allows you to add a “Vue” tab to your Chrome DevTools. It’s a simple Chrome extension you can install with a single click. It’s based on the same GitHub project as the aforementioned Vue.js DevTools for Firefox. You can use it to inspect your Vue.js components, states, and events right in the browser.

The Vue.js package for Atom adds Vue component support to the popular Atom source code editor. You can install it from the Settings > Install menu of the Atom editor. The package extends your editor with syntax highlighting and Vue.js code snippets.

11. Vue.js Extension Pack for VS Code

The Vue.js Extension Pack is a collection of Vue-related extensions for the Visual Studio Code editor. It adds syntax highlighting, code formatting, and code snippets to your .vue files. It also includes additional developer packages such as ESLint, auto close tags, IntelliSense, and a few others. You can install it from the Extensions panel of Visual Studio Code. 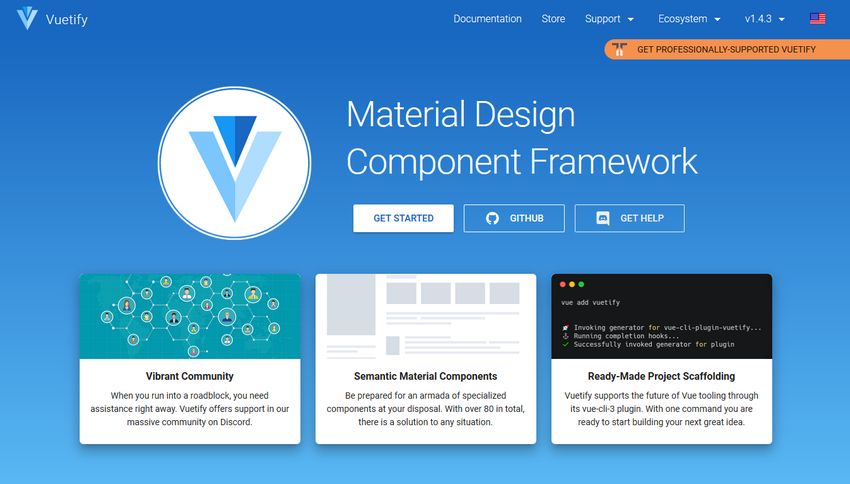 Vuetify is a popular Vue.js component framework that follows Google’s Material Design guidelines. It provides you with 80+ semantic and reusable Vue components such as cards, carousels, buttons, icons, toolbars, and other design elements. Vuetify supports all modern web browsers—even IE11 and Safari 9+ (with polyfills). It also comes with ready-made project scaffolding so that you can start building your Vue.js app with one single command.

Bootstrap-Vue is a comprehensive implementation of the Bootstrap 4 front-end framework for Vue.js projects. It adds a Bootstrap 4 grid system to your Vue applications. It also allows you to use BS4 components such as dropdowns, alerts, buttons, inputs, and others in your Vue projects. Bootstrap-Vue comes with extensive and automated WAI-ARIA accessibility markup, too. 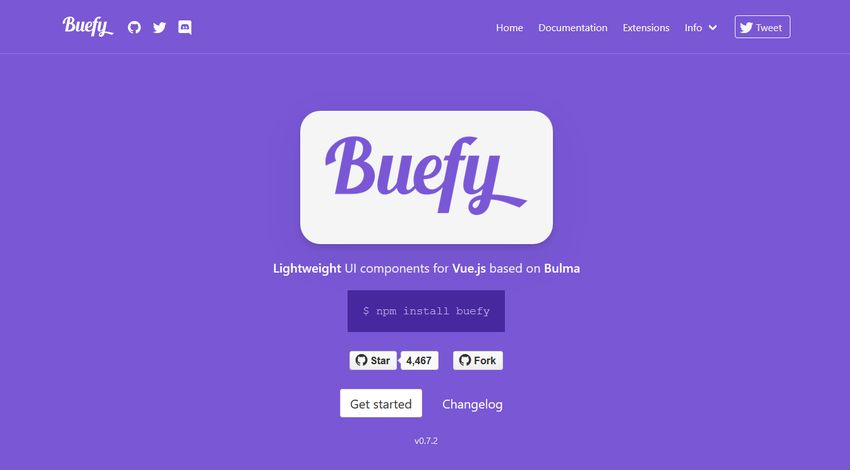 Buefy is a responsive UI component library for Vue.js, based on the Bulma front-end framework. As Bulma is built on flexbox, Buefy lets you use flexbox-powered components in your Vue apps. It’s a very lightweight library, as apart from Bulma, it doesn’t have any other internal dependencies. It supports both Font Awesome and Material Design Icons, too. 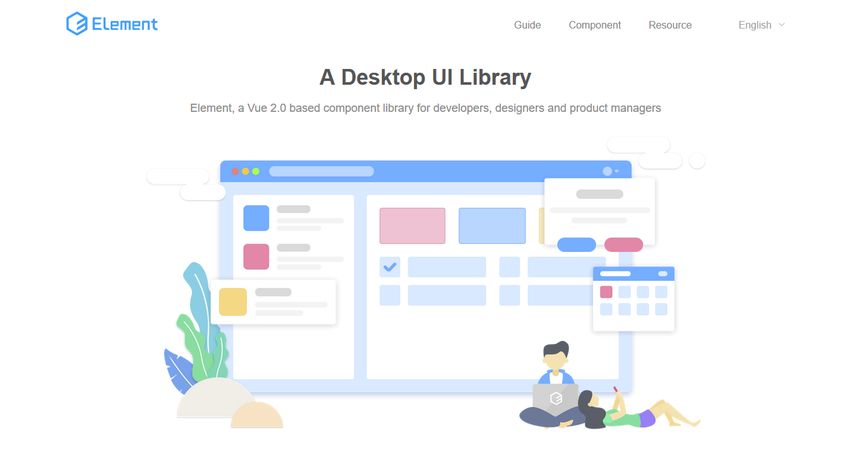 Element UI is currently one of the most popular Vue.js 2.0 UI toolkits. It provides you with loads of customizable Vue components you can use to build a professional-looking web application. Element UI has a huge community and it’s under active development with new commits being pushed every day. To get started quickly, you can use Element UI’s starter kit, generated by Vue CLI. 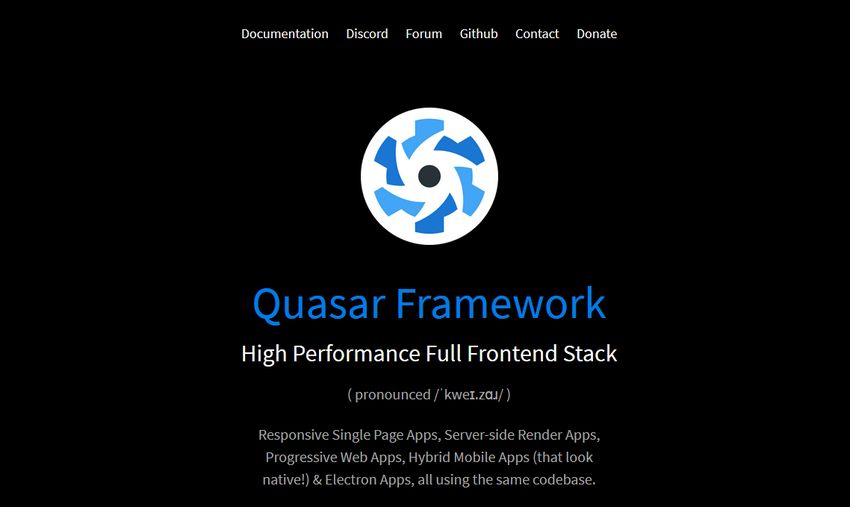 Cube UI is a mobile UI component library created with Vue.js. The components come with full unit tests and have been tested in production for more than a year, so you can safely use them. Cube components look pretty similar to native mobile components—with subtle animations and quick responses to user-generated events. You can customize the components according to your needs by editing the theme.styl file. 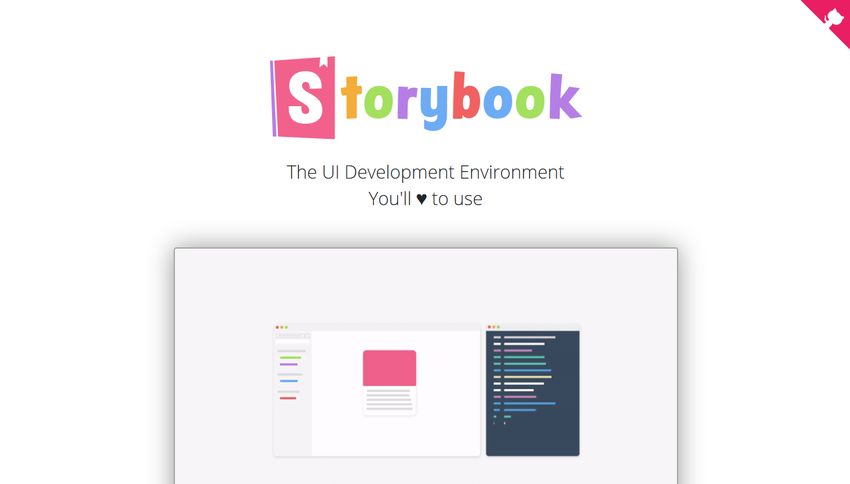 Storybook is a UI development and testing environment that works with different JavaScript frameworks, including Vue, React, React Native, Angular, and Ember. With Storybook, you create your own component library as a sequence of stories.

A story describes a single state of a component (like a visual test case). A component can have many stories and a Storybook usually contains many components. Check out the Storybook for Vue page that shows how you can get it up and running with Vue.js.

VuePack is an easy-to-use starter kit for your Vue.js projects. It lets you pick Vue.js components from a list and download them as a minified JavaScript file. VuePack includes a selection of handpicked Vue components such as navigation elements, forms, charts, notifications, and others. It also comes with nice developer features like ESLint, Babel 6, PostCSS, and Electron support.

Vue Dummy is a simple but superb GitHub project that facilitates prototyping Vue.js apps. It’s a Vue.js wrapper around the DummyJS dynamic placeholder library. It adds Lorem Ipsum placeholder texts and dummy images to your project as a v-dummy directive. Vue Dummy has a very straightforward syntax. For instance, you can generate a 150-word paragraph using the following code:

Vue.js is one of the most well-supported projects in the open-source world. This collection was just a small selection of all the Vue.js tools and resources you can find on GitHub and other developer sites.

If you want to learn about Vue.js more, also have a look at our tutorial about how to create a data table in Vue.js. And, if you are more interested in React development, we have a React.js tools collection that you might find useful, too.

By Sara Vieira
When you’re developing a large-scale project you always want to use some kind of task runner, in order to automate your workflow. Grunt is exactly that, a JavaScript task runner. It can prepare your code for production with one simple command. What can Grunt do ? ... Grunt is a JavaScript task runner and it’s able to compile your CoffeeScript, Less or Sass files , lint all your JavaScript, minify it or even put all of it in one file by concatenating them. Grunt is an amazing automation tool that allows...
CSS

By DeveloperDrive Staff
This is the first part of a series of tutorials that aim at to cover all aspects of web development. Each part in this series will build on the previous one, covering topics such as: HTML5 CSS3 jQuery We'll also be covering slightly more advanced topics such as: AJAX PHP MySQL Email Security/Authentication Where required I will go into the basics of getting a development environment installed and configured. I will also cover basic design methodologies and best practice. The Application ... To start...
Resources

By Sara Vieira
Web developers all have different ways of working, but there’s always that set of frameworks and libraries we install on each project no matter what. With this comes the tedious work of downloading each one and placing them in our project folder; this doesn’t sound like much if done once or twice but when it’s necessary almost everyday it becomes a tedious task. If you share this opinion Yeoman is right up your alley. What is Yeoman ? ... Yeoman is a workflow, it’s not just a tool but a collection...
CSS

By DeveloperDrive Staff
Continuing on from last weeks tutorial (Creating a simple to-do application – Part 1) and the short snippet (Turning a form element into JSON and submiting it via jQuery ), this week we'll be writing a PHP page to accept and process the form submit and return a JSON response. Installing PHP on your web server ... There are several ways to install PHP to your web server, but each is dependent on what web server you are running. The two main ones I will deal with are Microsoft's Internet Information Services...
JavaScript

By Sara Vieira
If you use a task runner in your workflow you’ll know why they are so useful in coding; they improve our workflow and allow us to focus on problem solving rather than repetitive data entry. Gulp is one such application and it has a lot of benefits to it. There’s a really simple syntax, no messy JavaScript files, a simple API and a wide variety of plugins. Installing Gulp ... As you’ll suspect if you’ve used a utility like this before, you need to have NodeJS and npm installed on your system, once you...
Tools

By DeveloperDrive Staff
React is a lightweight JavaScript library created by Facebook that has become highly popular in the recent years. It allows you to build beautiful UIs for your web apps using isolated and reusable building blocks called components. React also has a huge ecosystem mainly created by third-party developers, including several tools, component libraries, IDEs, extensions for code editors and web browsers, boilerplates, and more. In this article, we have collected the 20 best tools and resources for...
Database

By DeveloperDrive Staff
So far we've created some basic PHP pages and added some simple authentication. Today we're going to going to build on that by adding database support. This will allow us to add proper authentication to our application and start saving tasks. I should also note that I am currently writing PHP in-line and not using functions (or object orientated PHP) I will tidy this up in the next tutorial and spend more time explaining it and what it's benefits are. Last week ... Last week we installed XAMPP, so you should...
Tools

By DeveloperDrive Staff
Vue.js is a popular JavaScript framework that allows you to create single-page applications and user interfaces. It has a huge and active open-source community who have created hundreds, if not thousands of tools related to the framework. In this collection, you can find starter kits, boilerplates, developer tools, component libraries, and other resources you can use in your everyday Vue.js workflow. 1. Official Vue.js Guide ... The official Vue.js guide helps you get started with the Vue framework....
Home CSS Deals HTML HTML5 Java JavaScript jQuery Miscellaneous Mobile MySQL News PHP Resources Security Snippet Tools Tutorial Web Development Web Services WordPress